Thank you! Your submission has been received!
Oops! Something went wrong while submitting the form.
matheusjohn.peulen@gmail.com

The Seattle Supersonics were a professional American basketball franchise based in Seattle, Washington from 1967-2008.

After the 2007–08 season ended, the team abruptly relocated to Oklahoma City, Oklahoma, and now plays as the Oklahoma City Thunder.

I wanted to know how historical knowledge of sports franchise re-branding, combined with contemporary branding & marketing methodologies, could be used to renew the fervor & devotion of the Seattle Supersonic fan-base. 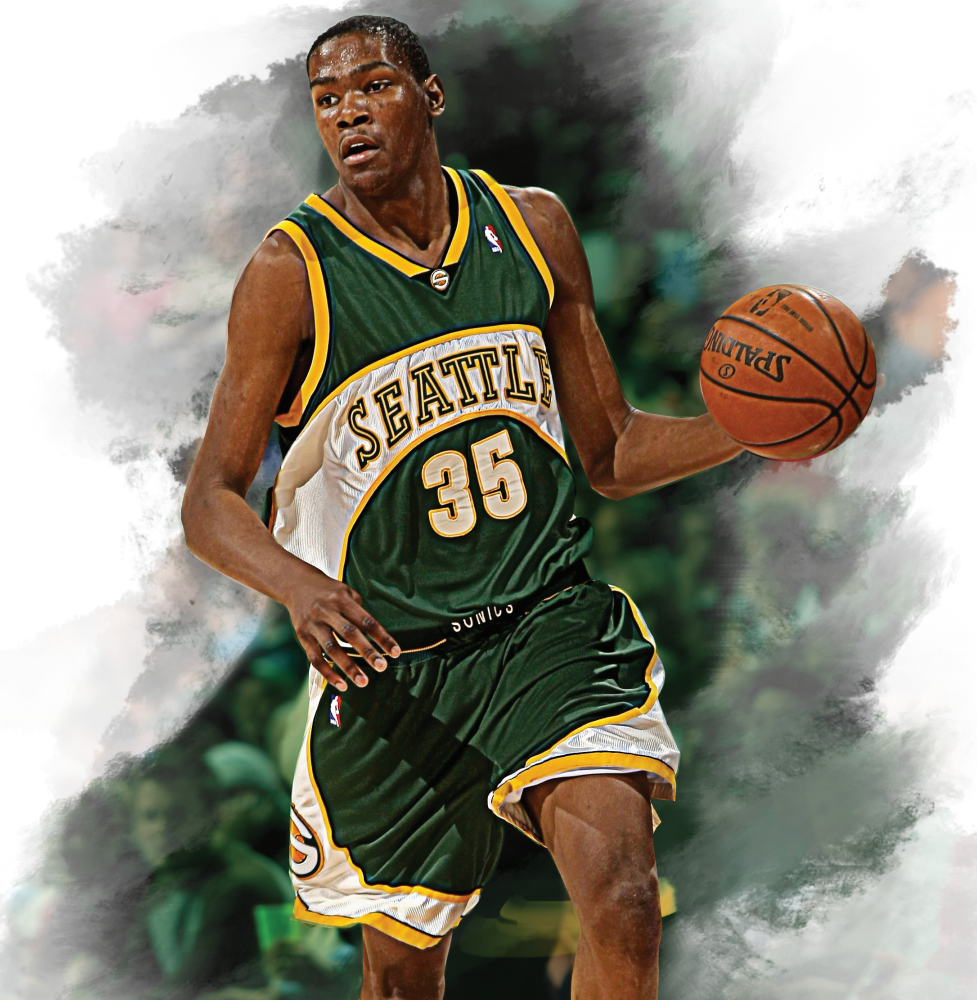 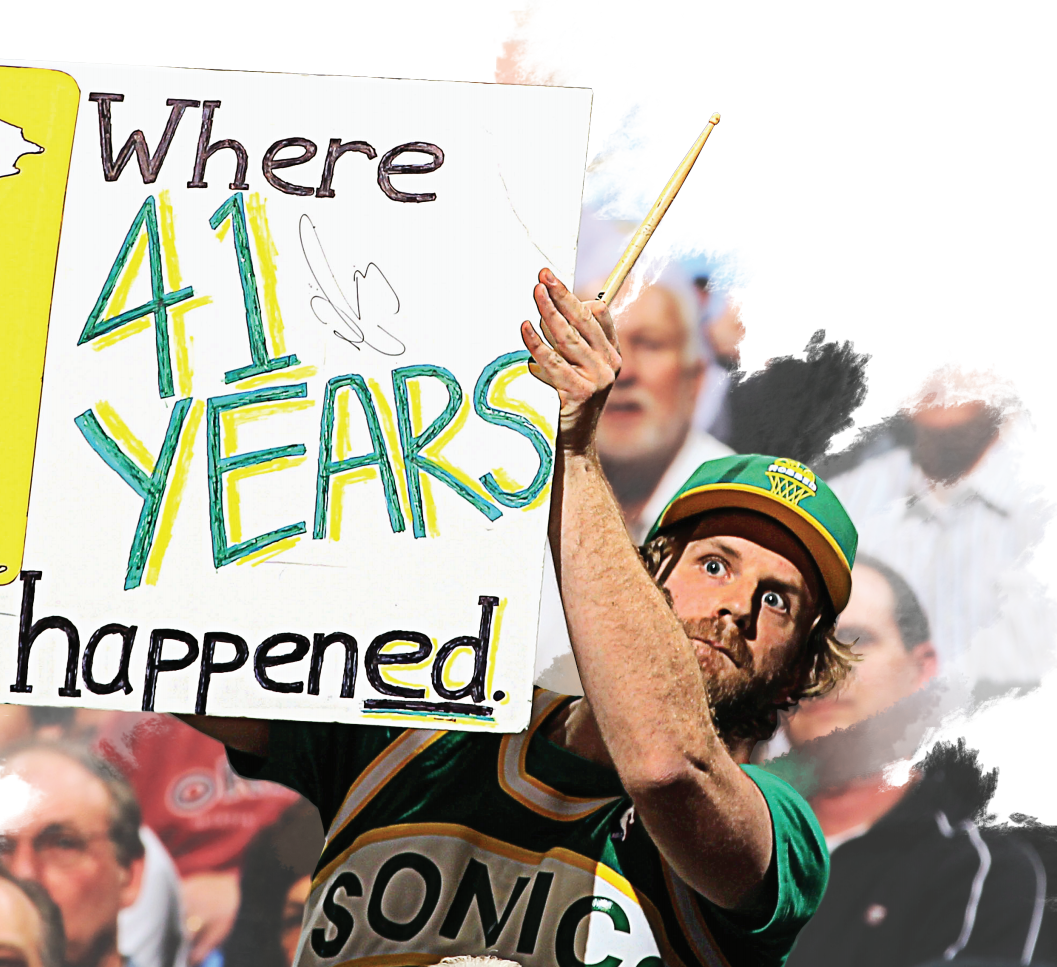 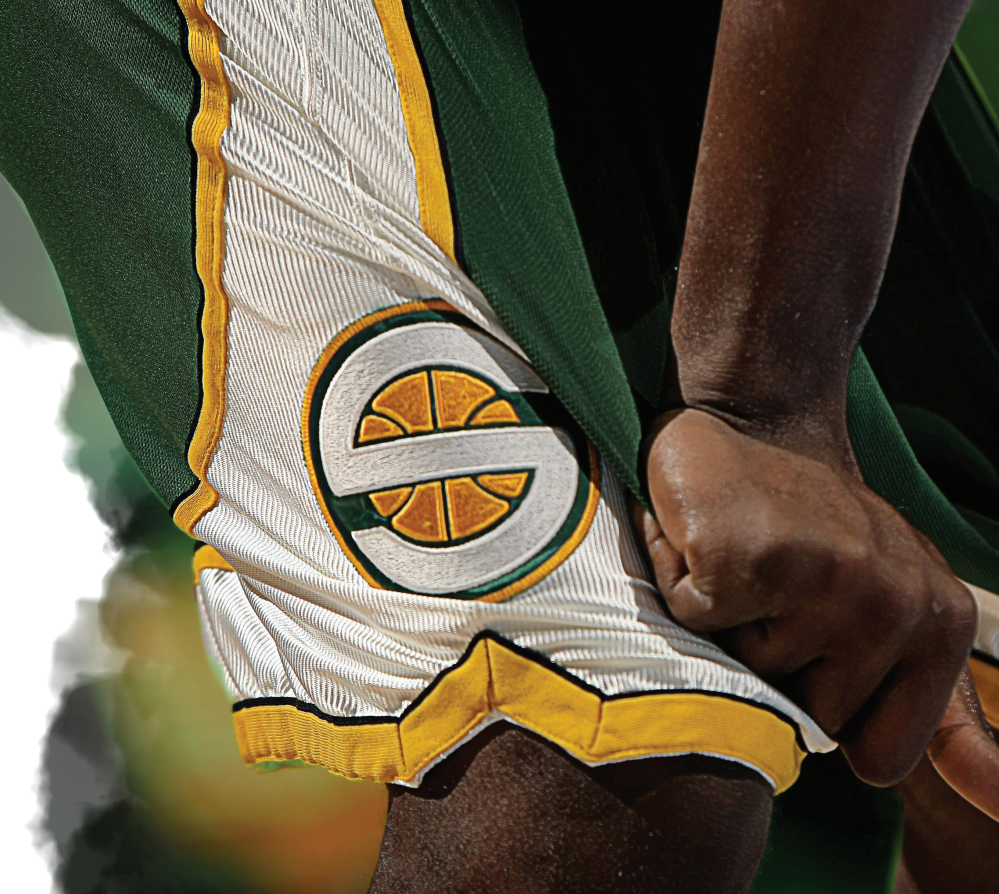 ‍The re-brand had to touch on a fan's euphoric connection to the team, rather than simply updating a logo to fit the design of the times.

Proof of success
‍
in 2018, an anthropological study done by Motive Quest looked at the Atlanta Hawks compared to similarly sized NBA markets. The data found that the Hawks had a relatively weak online presence, poor fan experience, and lack of fan connection to the current team and brand.

This information heavily influenced the Hawk’s re-branding process as the team appealed to their history to try and connect with current fans.
‍ 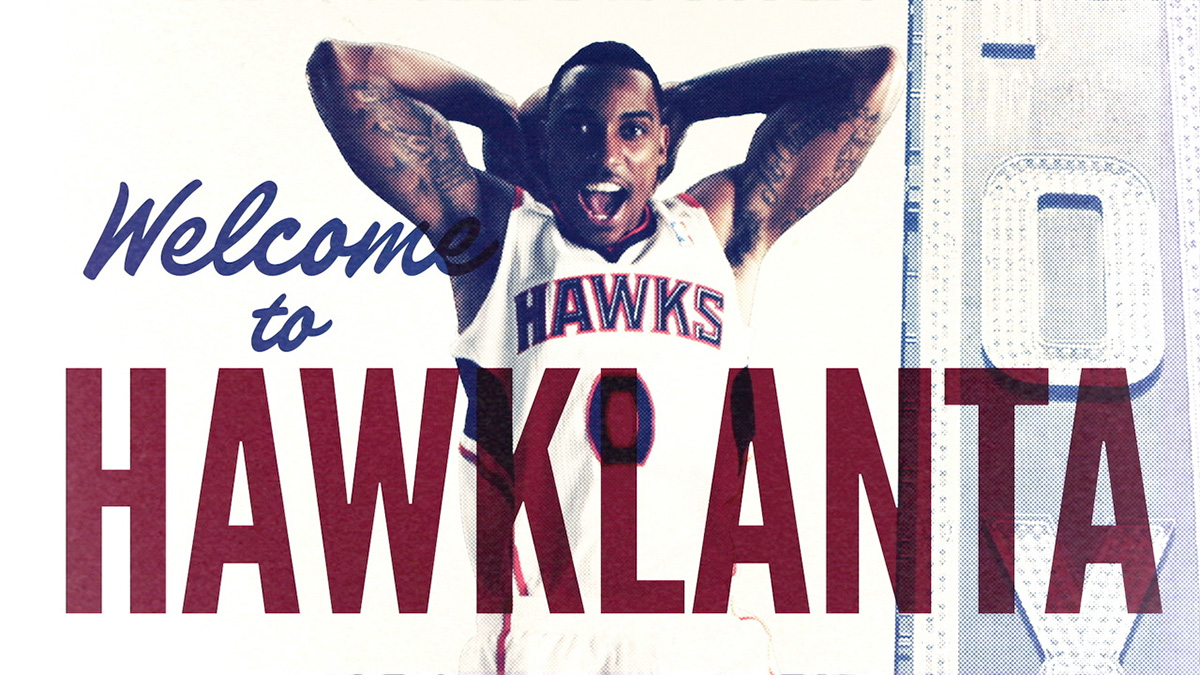 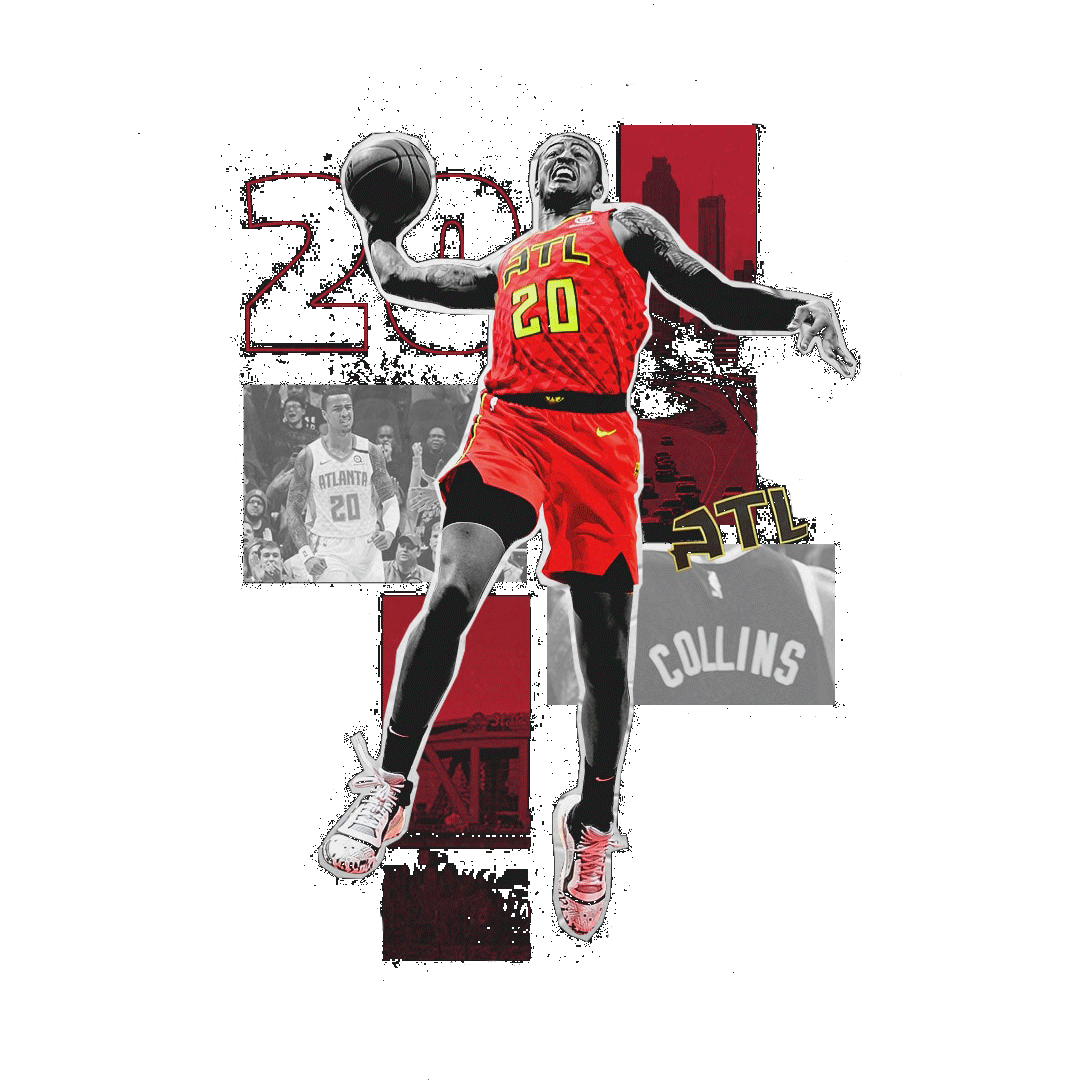 Thank you! Your submission has been received!
Oops! Something went wrong while submitting the form.
matheusjohn.peulen@gmail.com

The target demographic I chose to target was 25-35 year old men; they are more likely to watch, invest, and interact with sports and they were the most distraught demographic when the franchise left.

But first, a little history. In order to begin where to re-brand, I had to find out what logo to base the design off of. The Supersonics have had a wide range of Logos throughout their history, but it is important to pick the one that current fans identify with the most.

The logo that sells the most merchandise at online sports apparel websites that still sell Seattle Supersonics gear (r.g. Fanatics.com and NBAstore.com) is without a doubt the Skyline logo from the 70s. This logo can be seen on hats, jackets, and stickers of loyal sonics fans everywhere, and the logo is the ideal graphic for capturing the historic appeal of the team.

A preliminary pass. Research from the fan ranked top NBA logos suggested that the best logos were ones that were clean, easily recognizable, and had an obvious connection with the team and city.

A poll done by Trulia.com found that Seattle is the best soccer city in the US and is a place where Major League Soccer routinely sells out. The MLS Sounders have a massive fan following along with several other smaller clubs around the city. The target demographic for them also seems include 25-30year old men that love everything to do with soccer.Based of this insight,

The main logo I chose as the re-branded Supersonics matches that of a soccer club. This badge-like design would better fit with what my demographic’s sports interests are already, while stepping away from the traditional round shape of most NBA logos. The logo features the SeattleSkyline, which echoes back on the 70s logo while adding a jet breaking the 3rd dimensional plain. 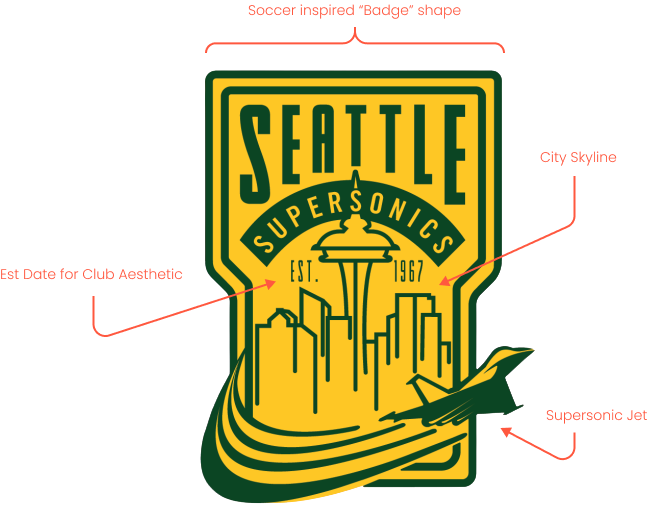 Color:
‍
Forest Green: Green is the color of renewal and energy and is often associated with growth. The dark element to it mirrors that of a forest, something that has been therefor a while with long roots. This is to remind the team of its history and roots in the city.
‍
Sun Yellow: This shade of yellow is to reflect that of a rising sun. To look forward to the future and to symbolize a new beginning.

Typography:
‍
Primary: The primary Typeface I chose that best reflects Seattle is called Skinny Sunbeams. This tall and slim typeface reflects the Indie culture which is still very prevalent in the city’s culture, especially amongst my target demographic, which still lists Indie music as a favorite.
‍
Secondary: The secondary typeface I chose to work with is Trade Gothic LT condensed.This typeface fits with the sports feel and is easily read.

If you look good you'll play good. Something all fans want to see when a team in brandishing a new look is how the jersey will look. NBA teams have anywhere from 3 to 6 different jersey designs they wear throughout the year. 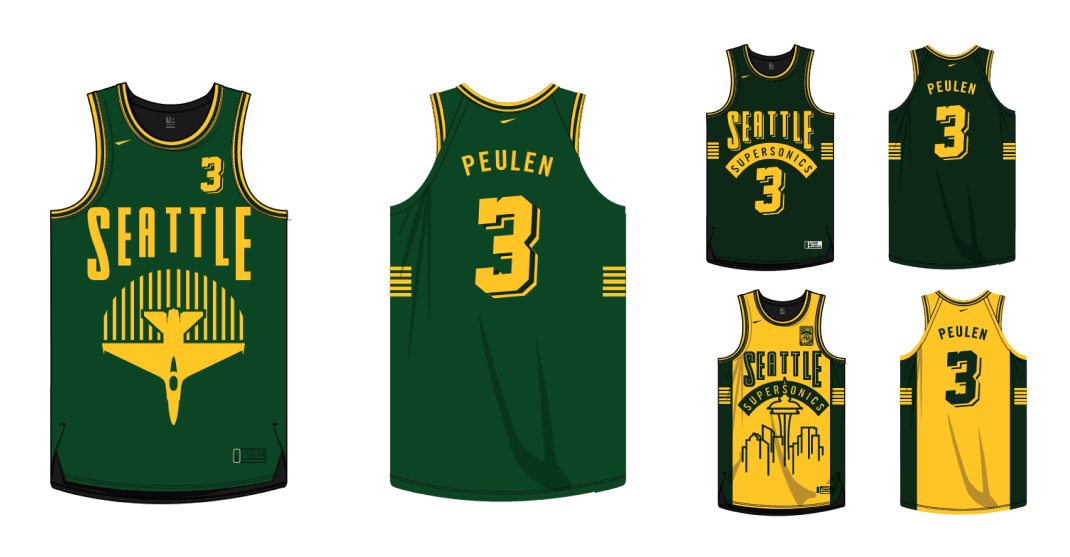 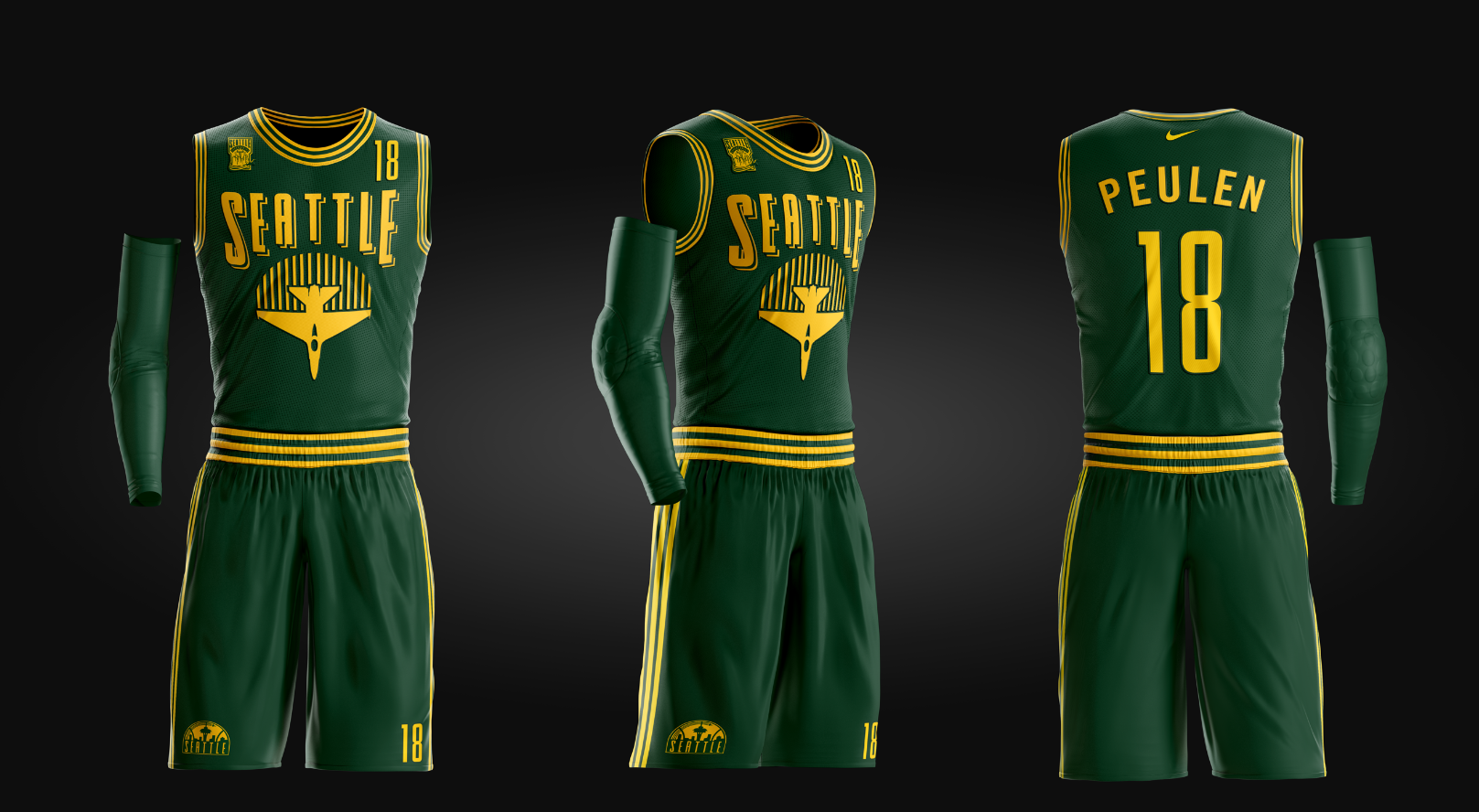 Now to make it come to life. After meeting with partners from the marketing world, I learned of the importance of teams incorporating this relatively new form of graphics. Analytics show that motion graphics get more traffic than any other form of Social Media posts.

I learned that they save big announcements for motion graphics, since they are the most important.It is for this reason I decided to create a series of motion bumps, designed specifically for Social Media Platforms such as Instagram, Facebook, andTwitter. The motion bumps would be centered around logo reveals for the newly branded team, and be labeled as a “Welcome Home Seattle” campaign.” 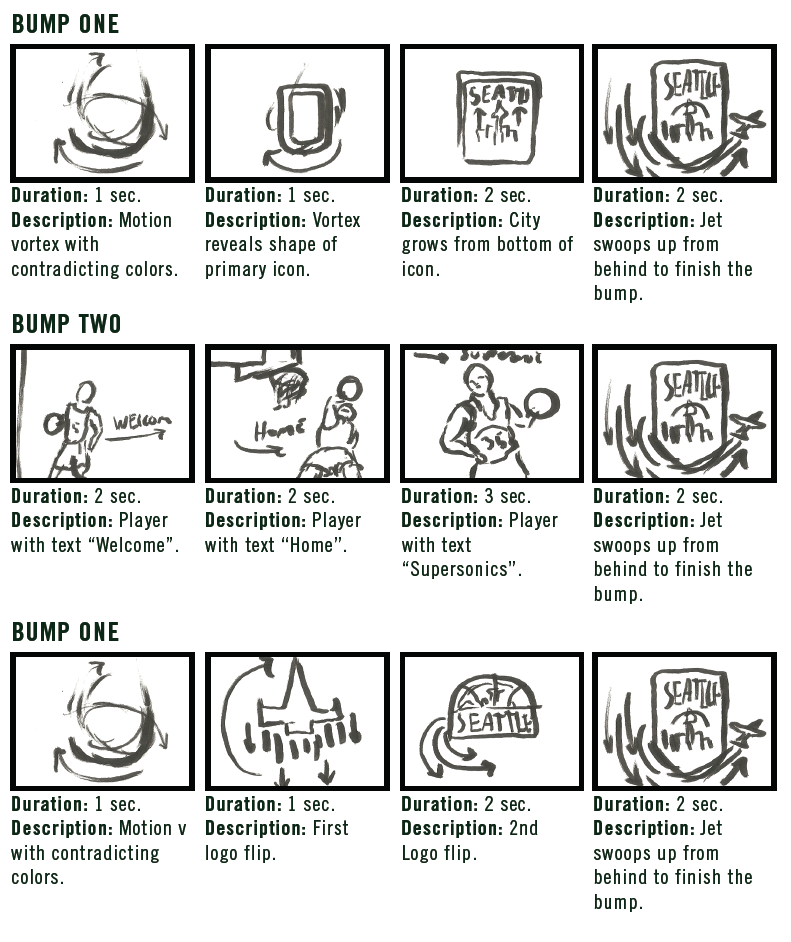